The Enchanted Hill, as Hearst called his beloved hilltop retreat, soon came to be understood as a museum: he filled the buildings and grounds with thousands of works of art purchased specifically to furnish the estate. These historic objects from around the world can be enjoyed today in the gardens, guest houses, and main building called Casa Grande. Samples from the collection are highlighted below. This painting of the Annunciation, one of the most prominent works of art (approx. 8 feet high x 5 feet wide) in the Assembly Room at Hearst Castle, is a masterpiece by the Spanish painter Bartolomé Pérez de la Dehesa (c. 1634 – 1698). Primarily known for his floral still-lifes, Pérez was named painter to King Charles II in 1689. Only a few large-scale figural compositions by him exist. His style is characterized by bold contrasts of […] Displayed in the Assembly Room, the Venus Italica is one of Hearst Castle’s greatest masterpieces. The composition was created by Antonio Canova (1757-1822) to replace an ancient Greek statue in Florence, Italy, which was seized for France in 1802 during Napoleon Bonaparte’s invasion. Canova, unwilling to do nothing more than carve a copy, instead invented a new figure, called the “Italian” Venus to distinguish it from the Greek sculpture. Its delicate beauty brought more requests to Canova for […] REST ON THE FLIGHT INTO EGYPT

Purchased by William Randolph Hearst in 1894 at auction, this painting dated 1879 by Luc-Olivier Merson (French, 1846-1920) is one of four versions of the same composition, of which the best known (also from 1879) is in the Boston Museum of Fine Arts.  Hearst’s example (25 x 44 in.) is distinguished by the crescent moon in the upper left corner.  Another variant is in the Musée des Beaux-Arts Chéret (Nice, France), and a larger composition (with […]

Explore REST ON THE FLIGHT INTO EGYPT Now attributed to Simon Vouet (1590-1649), this painting and its companion (Diana and Endymion) were purchased by William Randolph Hearst at auction in 1921 as works of art by Jean-Baptiste van Loo ( 1684-1745), whose name appears on the label on their frames. Neptune, god of the sea and creator of the horse according to classical mythology, is shown here in his chariot, turning back to look toward a woman who might be his wife, Amphitrite, […] SCULPTURES OF THE GODDESS SEKHMET

The name Sekhmet literally means “the powerful one.”  Shown with the body of a woman and the head of a lioness, she was the bloodthirsty daughter of Ra, the Egyptian sun-god.  The disc on her head symbolizes the sun.  As goddess of war, she was a destroyer, but she was often invoked as the protector of the pharaoh and thus as a healer.  Hundreds of images of Sekhmet are known.  Many were commissioned by Amenhotep III […]

Explore SCULPTURES OF THE GODDESS SEKHMET The Continence of Scipio

Woven on designs attributed to Giulio Romano (Italy, c. 1499 – 1546) Wool and silk Brussels, attributed to the workshop of the Dermoyen family, c. 1544 – 1548/55 Scipio Africanus was a Roman general who defeated Hannibal in the Second Punic War (210 B.C.) Scipio treated the enemies with clemency, allowing them to retain their own legal system. In this scene, the parents of a beautiful young captive have offered to pay for their daughter’s […]

Explore The Continence of Scipio This lamp incorporates the “Orchid Vase,” created in 1889 by Tiffany & Co., which won top honors at the Paris Universal Exposition that year. It was purchased by Phoebe Apperson Hearst (William Randolph Hearst’s mother), in 1889; she then commissioned Tiffany to provide the shade and convert the vase into a lamp (1891). The vase was made of silver that was formed first from the inside out. The decoration includes dozens of varieties of orchids, all […] Marble Roman, about 230 A.D. The sarcophagus depicts the deceased in the center as the god Apollo with his lyre.  Minerva, wearing armor as the goddess of righteous warfare, stands next to him. They are flanked by the nine Muses, minor deities who were the daughters of Jupiter. In ancient Greek and Roman mythology, they inspired poetry, song, and other arts. They are identified by the attributes that they hold. From left to right, the […] 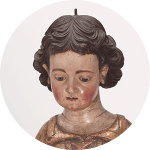 This charming sculpture was created in Spain and likely dates to about 1630-80. The figure represents the Virgin as a young girl, but the seraphim (small heads around the base) refer to her assumption into heaven after her death, while the open book refers to the signal event in her life: it is inscribed with the Archangel Gabriel’s annunciation to her that she would give birth to Jesus Christ. The sculpture is polychromed in estofado, a […] This limestone relief depicts Saint Paul, identified by the instrument of his martyrdom, a sword. It is mounted on the façade of Casa Grande with its companion, a relief of Saint Peter, who holds the symbolic key to Heaven. The style of the reliefs, possibly inspired by the work of Damian Forment (1480-1540), dates them to around 1525. Hearst bought both reliefs at auction in May 1923. They were sold by Pedro Ruiz, who, with […] Covered Jar In The Form Of A Face

Lighthearted accents of Art Deco punctuate the early Renaissance ambiance of Hearst Castle. One of the most engaging examples is this covered jar. On its underside, the inscription “Atelier Primavera” appears in black, identifying the jar as a product of the French chain of department stores called Au Printemps, primavera being the Italian word for printemps (meaning “springtime” to refer to the shop.) Atelier Primavera, the exclusive house-brand of the department store, was established in 1912 […]

Explore Covered Jar In The Form Of A Face 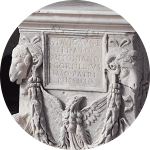 Marble, 79-81 AD with late 18th-century lid and repairs Ancient Roman workshops produced many small funerary monuments like this one; they could be personalized with an inscription chosen by the patron. This cippus is carved with the name of a father who set it up in his son’s memory. The letter “L” at the upper right corner means that the son was a liberated slave – in Roman society, a freedman. The date is determined by […]